Click here to view the Joint Committee Report powerpoint presentation from the AAUP Chapter Meeting on 11/12/2020.

Thank you to all who voted in the 2020 Election. 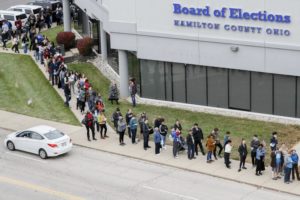 Thank you all for your feedback, attention, and support as we continue to navigate this challenging time. What follows are two critical updates: the first details the AAUP-UC discussions with UC Administration about compensation in the context of projected budget issues due to COVID-19, and the second focuses on the future work of the Joint AAUP/Faculty Senate Budget Task Force. You can also watch a recording of the July 29th Town Hall on our webpage for more information about these topics if you were unable to attend.

We are grateful to everyone who took the time to complete the survey we sent out a few weeks ago. The responses provided important guidance to the Executive Council. Perhaps unsurprisingly, results indicated that Faculty have already put in a tremendous amount of extra time and energy converting Spring Semester classes and preparing for an uncertain Fall Semester. For example, 85% of faculty reported spending additional time over Spring Break preparing for remote learning, with the modal response being more than 30 hours of extra time. Faculty were also clear that, while they were reluctant to consider cuts to compensation or healthcare, they were willing to explore the option of extending the benefits of the current Collective Bargaining Agreement (CBA) for another year.

The final Memorandum of Understanding (MOU) between Administration and AAUP-UC will call for a 20% reduction in Faculty Development funds for FY 2020-2021 and will offer Faculty the option to take voluntary furlough days between August 2020 and April 2021.

What follows is a recap of the proposal/counterproposal process.

Meanwhile, the joint AAUP-UC/Faculty Senate Budget Task Force continues to do its important work and will be releasing a comprehensive report later this summer. The AAUP-UC remains concerned about the nature of permanent cuts to college operating budgets. A recurrent theme raised by Faculty at the July 29th Town Hall noted that UC’s Administration has not provided clear answers as to why they are proposing permanent budget cuts to solve a temporary budget crisis. Earlier this month, Ohio announced that cuts to the State Share of Instruction (SSI) would be far less severe than what the UC Administration had projected. UC’s response was to eliminate the use of any of its reserve funds to deal with the pandemic. This is not the response one would expect of an institution in a financial crisis. The short- and long-term impacts of these permanent cuts are of concern to many Faculty and will have adverse effects for the core mission of the University. Permanent solutions are still necessary to re-focus UC on its core academic mission of teaching and research.

As we move forward, the proposed changes to Faculty Development funding and the option of voluntary furloughs will be incorporated in an MOU. Because we avoided reopening the contract, this action will not require a vote of the membership. The AAUP-UC team wishes to thank the Administration for their professionalism and cordiality during these discussions. We hope to continue to work with UC Administrators in good faith as we move forward together in partnership to keep UC’s academic mission robust and healthy.

Overall, these discussions resulted in a very positive outcome. Many other Ohio Faculties had furloughs and reductions forced upon them. We are fortunate that we have a strong Collective Bargaining Agreement as a foundation for these discussions.

And finally, thank you to our membership for your support. We have received many, many new memberships over the last few months, which not only makes our Chapter stronger but also better positioned going into negotiations in 2022. Remember that only members can vote on the Contract or changes made to the Contract. If you are not yet a member, please visit the AAUP-UC website or email the office for a membership form.

Thank you to everyone who completed the survey on COVID 19 responses. The participation rate was very high. Your responses are productively guiding the Chapter’s Executive Council as we move forward.

The survey results clearly demonstrate that  Faculty have put in a tremendous amount of additional work in response to COVID-19 and thus have reservations about making substantive changes to the current Collective Bargaining Agreement (CBA). An AAUP Works article outlining the survey results will be published by the Chapter shortly.

To gather additional feedback and provide an update on the situation, we will be holding another university-wide Faculty Town Hall on Wednesday, July 29, at 10 a.m. via Zoom. A link to the town hall will be sent the day before the meeting.

As a reminder, the AAUP-UC Chapter received a request to engage in formal discussions with the Administration—including the exploration of contractual means—to address the financial crisis facing UC. Negotiations are not required, and the current CBA will remain the same unless both sides agree to change the terms. AAUP-UC has appointed a team to engage in preliminary discussions and exchange information with the Administration. Again, please bear in mind that these are not formal negotiations at this time.

Professors Mockabee and Peplow also serve on the AAUP-UC/Faculty Senate Joint Budget Committee. Their expertise and familiarity with UC’s budget and the financial implications of the current situation have been advantageous. Professor Russell has been on past bargaining teams and is a particular expert in the area of faculty development funds. We thank all three of these faculty members for their commitment of time and service on behalf of our Chapter.

As always, the AAUP-UC Executive Council will continue to be as diligent and transparent as possible as these discussions proceed. I hope to see you at the Town Hall on Wednesday.

Prev / Next Back to Top