Negotiations between the Chapter and the Administration continue at a very aggressive pace. We often receive questions about the length of negotiations. There are currently forty-one sections of the CBA (Collective Bargaining Agreement) and several accompanying Memorandums of Understanding (MOU’s) These all have to be negotiated along with the economic proposals. Some of these items have been tentatively agreed (TA’d) with minimum or no changes. Others require substantial negotiations. This cycle there has been much activity over Article 8 (grievances) and Article 9 (disciplinary issues). These are critically important to ensure that all Faculty Members’ due process rights are protected.

The Administration has proposed changes to the cost of Faculty health care (Article 16). This is frankly disappointing. Given the challenges that the Faculty have faced over the past several years it was hoped that health care would be approved without negotiation. The Bargaining Team has also put the AAUP-UC’s initial compensation proposals (Articles 10, 12, 13, 14, and 15) on the table.

There are eight bargaining sessions scheduled over the next two weeks. We thank the bargaining team, Executive Director Eric Palmer and the Faculty volunteers Steve Mockabee, Cassie Fetters, Ron Jones, and Annette Redmon for their time.  Numerous other Faculty members are providing additional support, including Jennie Russell, Amber Peplow, and Cynthia Ris. The AAUP-UC Executive Council and Associates Council have also contributed their time. Thank you!

More communications will be forthcoming. Stay tuned and contact the AAUP-UC office at aaupuc1@ucmail.uc.edu to get involved. Will UC’s “Off the Field” Excellence Receive the Necessary Support?

On September 10, 2021, UC announced with great fanfare and self-congratulation that it would be joining the Big 12 Athletic Conference by July 2024. President Pinto proclaimed that “the Big 12 ranks among the nation’s premiere athletic conferences,” and that “UC’s membership in this Power 5 conference will position us for even greater success both on and off the field.” Notably, the rhetoric at the time was clear to emphasize that our university, by entering the Big 12, will be aiming for new heights across the board, and not just in our athletic programs. The official press release noted that “UC will join an impressive group of academic institutions. Three Big 12 schools are members of the Association of American Universities (AAU). Nearly all schools are classified as R1 Universities.”

UC has established a special donation drive as well as a significant commitment of university resources to make sure the athletic department is “Day One Ready” for the Big 12. After a very successful 2021 football season, for instance, the university was understandably eager to retain Coach Luke Fickell and the track record of excellence he has generated while here at UC. In February the Board of Trustees granted a two-year extension to Fickell’s contract (through 2028) and increased his base salary from $3.4 million to $5 million per year. His current contract has now more than doubled since 2019, when Fickell earned $2.3 million.

The question that faculty, and indeed the entire UC community, might ask, though, is whether the university is willing to spend a proportional level of resources to recognize and support the excellence demonstrated at UC off the field. At his State of the University address on April 14 President Pinto himself acknowledged our faculty’s exceptional performance:

“Our faculty work extremely hard, with passion, to support our students and ensure their success. In 2021, more than 11,000 UC students completed their degrees, despite the pandemic. And in a couple of weeks, we will add more than 5,500 graduates to their ranks….

We are fortunate to have such stellar teachers, researchers, innovators and clinicians educating the next generation. You are vital to the success of our university, and to fulfilling our vision to be ‘leading urban public universities in a new era of innovation and impact.’”

The data from the 2020-21 AAUP Faculty Compensation Survey show, though, that if faculty salaries remain similar to where they are right now, UC will not be winning any Big 12 championships in this regard. If UC were already a member of the Big 12 in 2020, its average (mean) salaries for Full, Associate, and Assistant Professors would all fall well below the conference average, ranking 9th, 7th, and 12th, respectively, out of 12. (Data were not available for current Big 12 member West Virginia or for future member BYU). The salary gap at the Assistant rank is a whopping $12,235 (UC mean of $75,948 versus Big 12 peer mean of $88,182), a shortfall of 16%! The gap at the Professor level is 8%, and at the Associate level is 6%.

UC’s administration has often defended low faculty salaries by pointing to Cincinnati’s relatively low cost of living. To address this, we show below the salary data adjusted by Regional Price Parities (RPP), a measure of the differences in price levels across states and metropolitan areas that is produced by the Bureau of Economic Analysis at the U.S. Department of Commerce. The data show that even after adjustment by the federal RPP index, UC’s salaries would all continue to occupy the middle to lower half of the rankings. UC Assistant Professors would still place dead last. 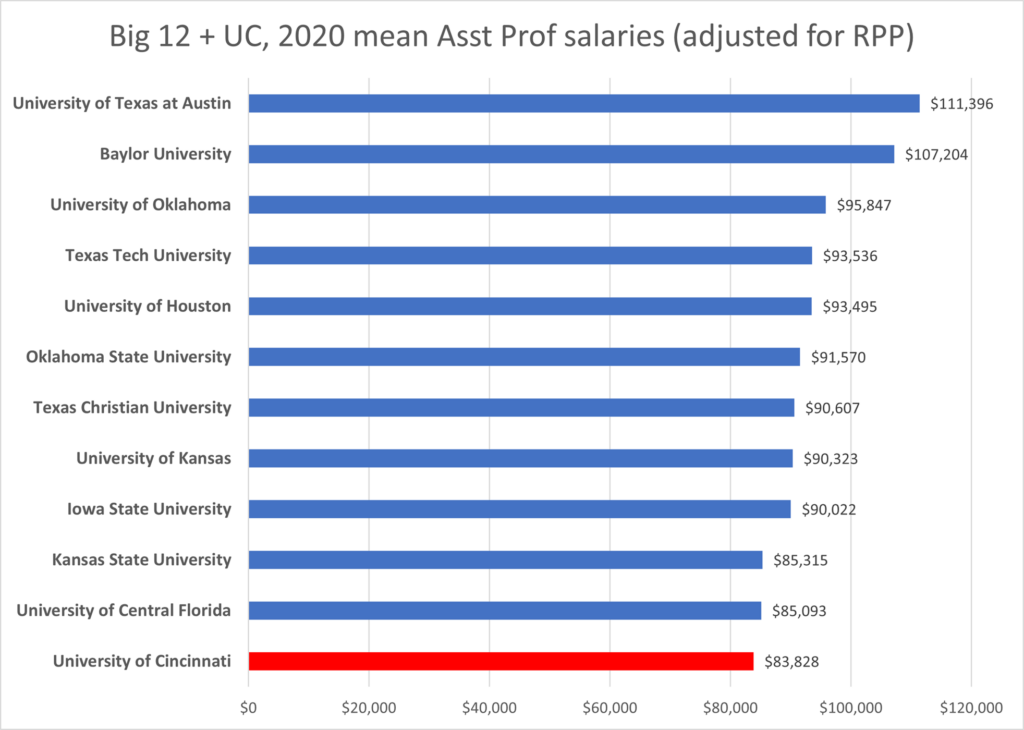 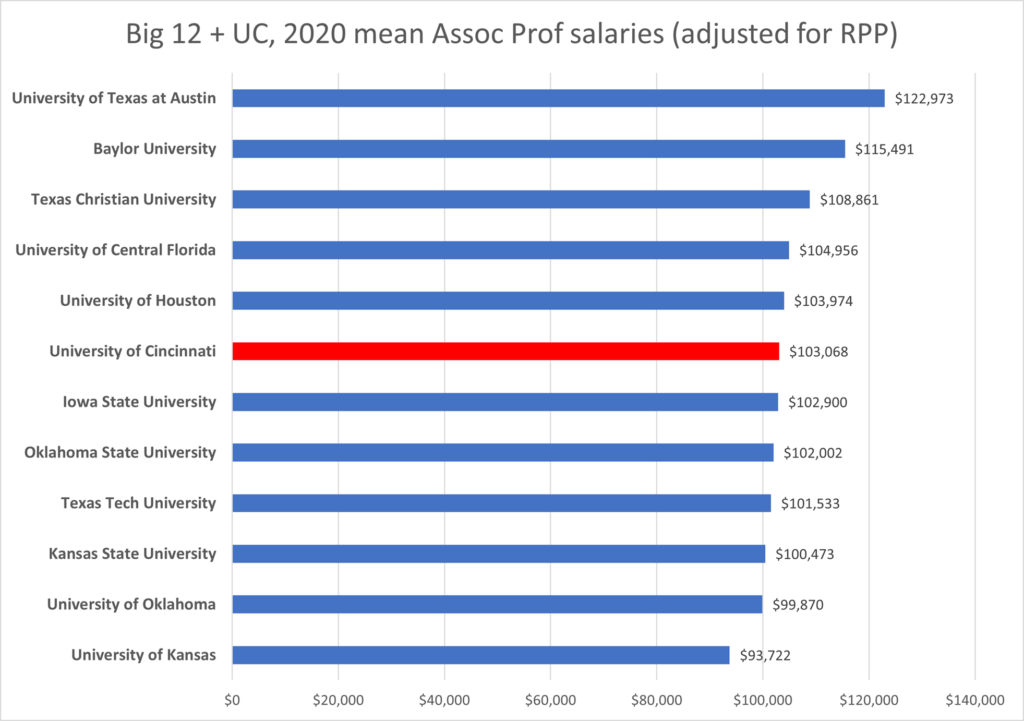 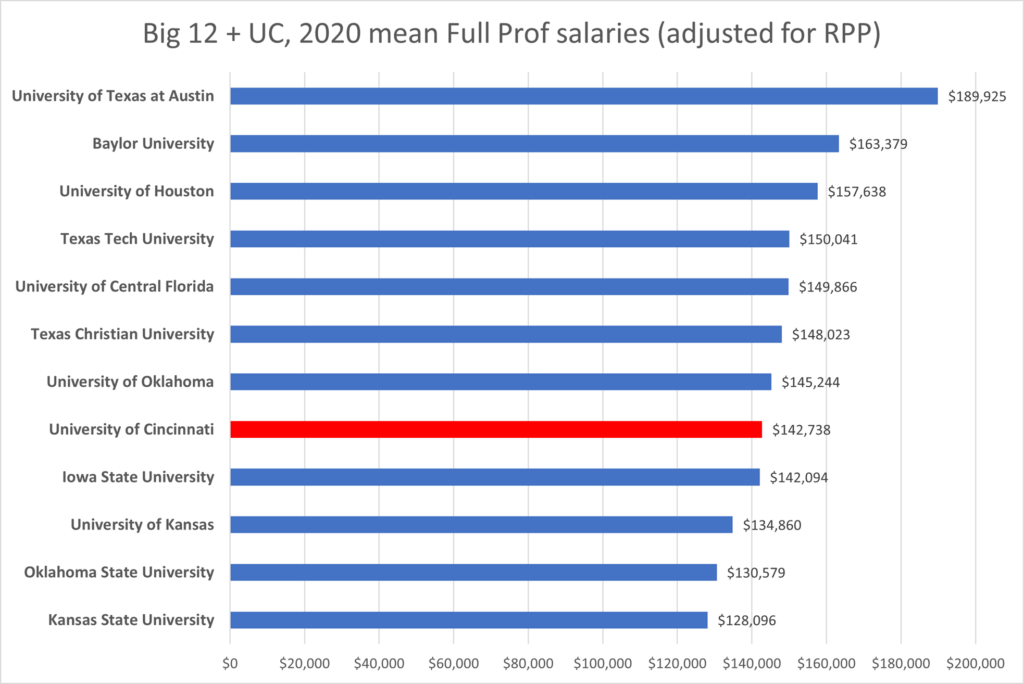 Even more disheartening is a comparison between UC faculty salaries and a group whose membership the university has already joined—the peer institutions UC itself chooses when reporting data to the U.S. Department of Education’s Integrated Postsecondary Education Data System (IPEDS).

For the 2020-21 school year, UC submitted to IPEDS a peer group consisting of primarily urban public research universities, including Ohio State. Unfortunately, faculty salaries sit even further from the upper tier schools in this set than from those of the Big 12: 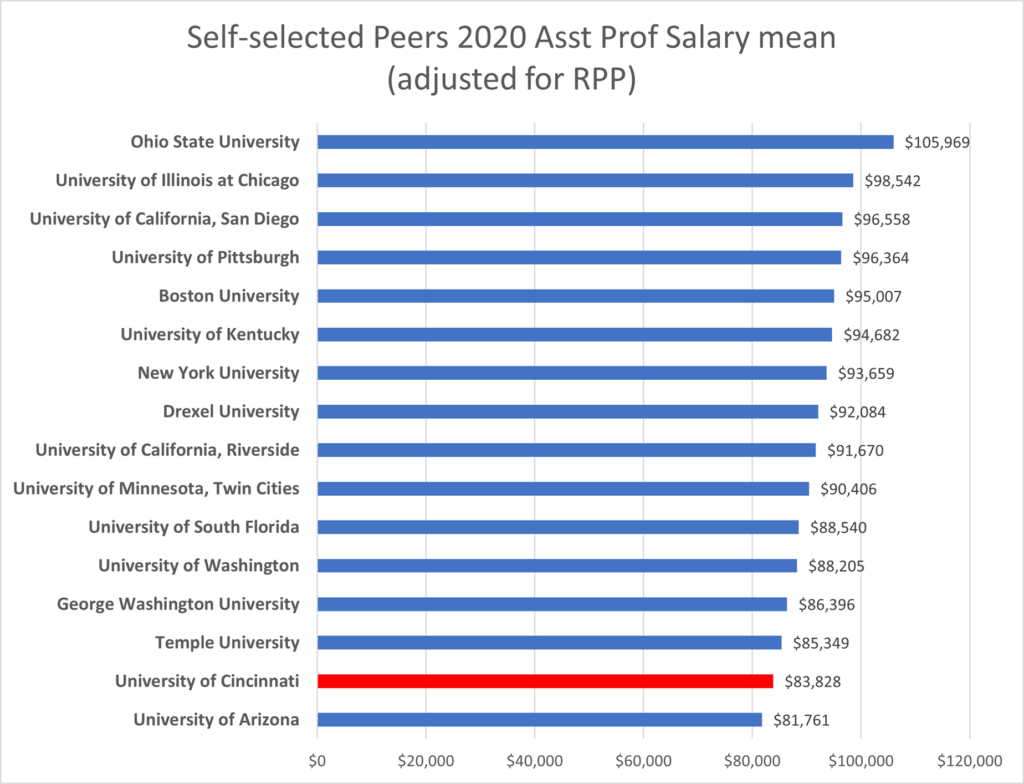 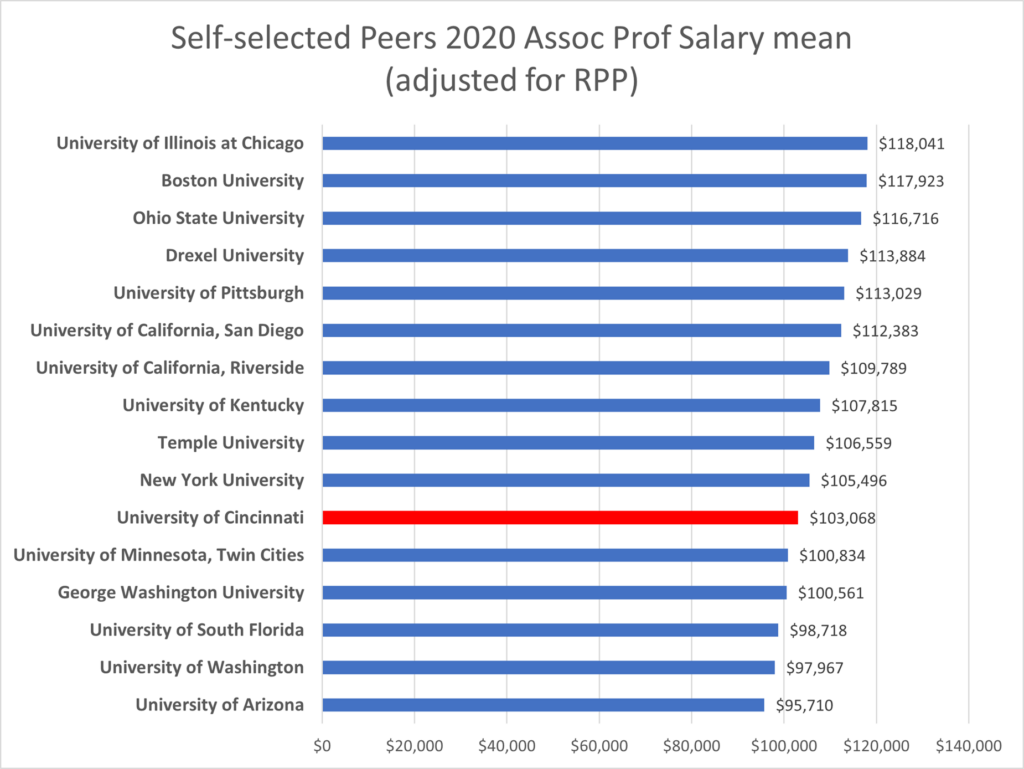 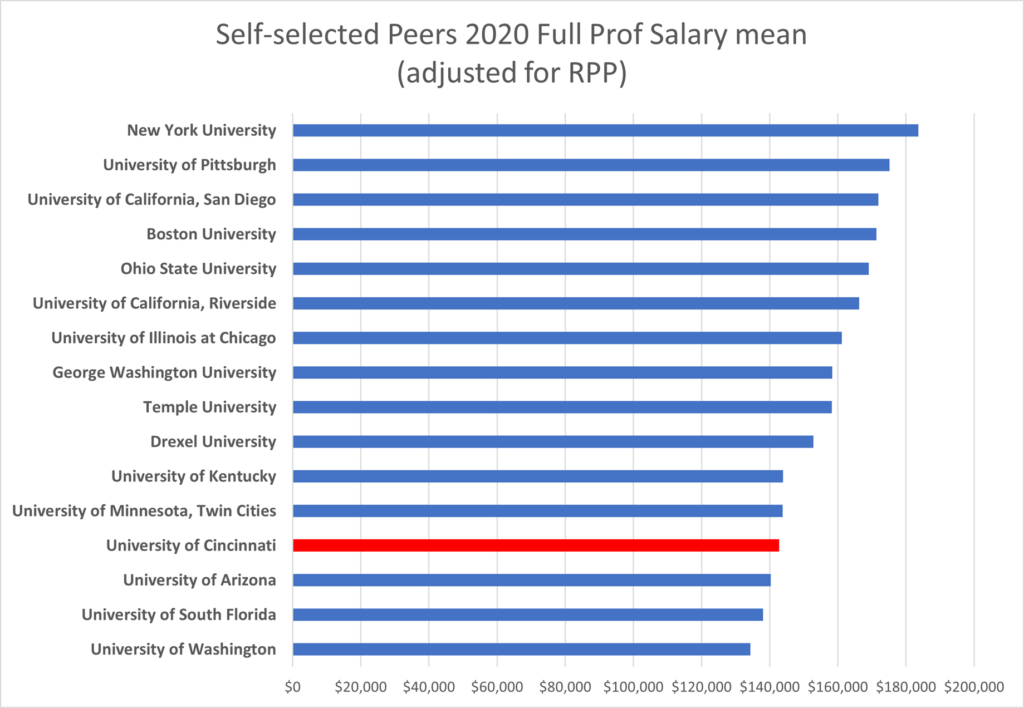 Faculty undoubtedly agree with President Pinto’s claim in support of the Day One Ready campaign that “[as] Bearcats, we are relentless in the pursuit of excellence.” We strive every day to support our students and our community the best we can, and the record shows that our best is quite good. And we also want UC to be the best possible institution it can be—that is, we want it to live up to the lofty words of its leadership. To do so, though, the university will need to commit its support to our excellent faculty just as it has already committed its support to our excellent Coach Fickell.