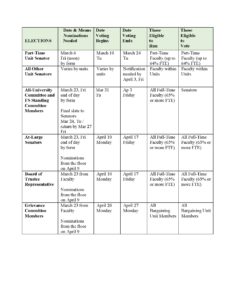 Feb 10 (M)      Announcement to Senators of the Election Calendar

Reminder to all Faculty for final nominations by Monday, March 23

Mar 27 (F)       Final nominations due from Senators for All-University and FS Standing Committees.

April 6 (M)      Notice to faculty of slate of candidates for Board of Trustees, At-Large Senators, and Grievance Committee Members [Run-off ballot, if needed, sent 4/6]

*Final nominations taken from floor of Senate meeting for:

*Nominations to be sent in via JotForm as noted in email.