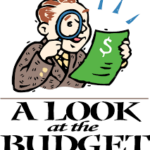 In recent weeks, the administration has taken issue with the 51% Campaign’s claim that only 43% of the budget is spent on academics and counters that UC has budgeted 68% on academics in FY 23. The AAUP would like to take this opportunity to clarify our argument in order clear up any misunderstanding and further the discussion on this matter. We applaud Faculty Senate Chair Dan Carl’s charge to the Faculty Senate Budget and Priorities committee to investigate this discrepancy and are willing to make ourselves and our data available to help with their work.

The 51% campaign was originally inspired by the Budget Solution white paper from the Dean’s Council created in February 2019.* (For the full Budget Solutions report, please see https://aaupuc.org/budget-solutions-from-the-council-of-deans-february-2019/). In this report, the Deans pointed to 2018 AAUP data analysis of the effect of PBB to illustrate how funding had been shifted away from the colleges. In FY 2010, the first year of PBB, colleges retained 50.69% of the revenue that they generated, but by FY 2017, the percentage of revenue retained by colleges dropped to 43%. The Budget Solution points out that had the colleges continued to keep 50.69% of their revenue the colleges would have had collectively an additional $52 million in their budgets. The AAUP has advocated that the budget model change to allow colleges to retain 51% of their revenue in order to ease the manufactured budget crises created by PBB and provostal taxes that have continuously syphoned money away from the colleges since the inception of PBB. The cumulative effect of this money drain has negatively impacted the colleges’ ability to serve students and pursue our academic mission – especially educating undergraduate students.

Other than instruction, the largest variance in percent of expenditures is scholarships. UC’s percentage of scholarship expenses in FY ‘22 exceeded OSU’s FY ‘21 expenses by 13% and the Ohio Average’s in FY ‘21. Scholarship spending for other Ohio Institutions in FY 21 falls behind UC’s by 6.4% to 10.5% depending on the fiscal year. Including scholarships as part of the budget is problematic. With categories like instruction, it is a hard expense meaning the salaries of faculty providing the instruction must be paid by the university. Scholarships are different, though, because they aren’t an actual cash expense.  A scholarship that offers reduced tuition does not require the outlay of additional funds by the administration. An analogy could be drawn to a restaurant patron using a coupon. The restaurant does not pay the customer to eat there, they simply make a smaller margin on the meal.

We would appreciate a clear and detailed accounting of what types of expenses are included in academic support and student services, which often include highly paid administrators or other bureaucratic spending. Instruction is a fairly straightforward category, as the majority of the expenses are faculty salaries. The percentage spent on instruction compared to OSU and other Ohio universities is a real cause for concern, especially with years of record-setting increases in enrollment. Finally, we would like to see how these numbers break out in terms of unrestricted funds in addition to all funds. An All-Funds budget includes both restricted and unrestricted funds, but UC has very little choice in how restricted funds are spent. Looking at the unrestricted funds may further illuminate the administration’s spending priorities. Faculty must remain vigilant and continue to advocate for UC’s core academic mission.

** Please note that the AAUP prefers to use actual spending rather than projected spending.

*** Please note that the student services may be up in FY 22 due to federal funds due to the Covid Relief Act. Administration indicates that FY 22 may be an anomaly due to these funds. The other universities are likely to see increases in these funds as well. 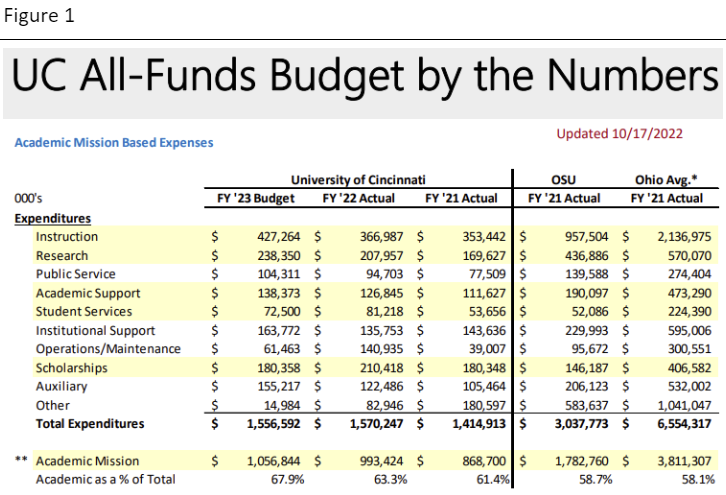 Both candidates endorsed by the Chapter for the Ohio legislature won election in November. As expected, Catherine Ingram was elected to the Ohio Senate, replacing outgoing Senator Cecil Thomas. The Chapter also endorsed and contributed $5,000 towards Representative Jessica Miranda’s reelection effort. She was reelected by a small margin (2,000 total votes). This is an example of the Chapter’s financial support making a difference in a highly competitive race. Both Ingram and Miranda have a record of communicating with the Chapter and supporting higher education issues.

Overall, there was little positive election news statewide. Republicans increased their super-majorities in the House, Senate, and won every statewide race. The Chapter strives to be nonpartisan, but the Republican caucus has repeatedly introduced legislation that undermines the role of Faculty and has reduced public support for higher education. The Chapter will continue to work with both Republicans and Democrats whenever possible to advocate for higher education issues. 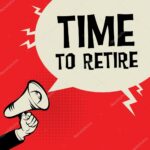 DID YOU KNOW…..what the best time of year is for you to retire?***

Keeping those 6 points in mind, here are some generalizations about the best time of year to retire:

Faculty Members with 12-month appointments can retire anytime during the year — for considerations of pay and health insurance, it doesn’t matter when and it doesn’t matter what retirement plan you are under.  When you retire, you will already be paid up to date and you will need to have health coverage ready immediately upon retirement.

All else being equal, two-semester faculty who retire under the ARP or Grandfathered plans are generally better off retiring at the end of the Academic Year in August.  Their retirement income is not coming from a state government related system but rather from whatever they decide to withdraw from their retirement accounts.  They also are not eligible for System provided and/or subsidized health insurance.  By waiting until August to retire, they can continue to be covered through the end of August by the health insurance provided as a benefit of the UC/AAUP Collective Bargaining Agreement, thus maximizing that benefit and putting off the need to be covered by private insurance until September 1st.

***Please keep in mind that we are not professional retirement advisors.  You should discuss retirement options with UC Human Resources/Benefits and/or a representative of your retirement system and/or your personal financial advisor before deciding the best time to retire for you.